Home » Streaming » How can I watch US TV in France? Here’s what to do !
Streaming

How can I watch US TV in France? Here’s what to do !

France is endowed with a nice geographical shape, a moderate climate and blessed with a capital that is widely regarded as the City of Love. Then it’s no surprise that France is the most visited country in the entire world. Either for leisure or for business, everybody wants to visit the country someday, including American citizens. However, the question often on the lips of US expats or tourists is “how can I unblock and watch US TV in France?”.

That is because most American streaming services usually don’t allow people residing in other countries to access their content as we saw in our article talking about AMC abroad. So, this article aims to teach you how to unblock and stream US TV in the wonderful country.

Why is US TV restricted in France?

Thanks to copyright limitations, there’s a difference between people residing in the United States and people living in other countries. Everybody else is left out and doesn’t have the privilege to access, stream or watch US TV content internationally.

Due to the business involving all types of films, series, shows, and documentaries, such restrictions are often solid. Otherwise, their commercial interests would be significantly jeopardized. People from other countries like France would just be able to watch their content for free.

Whenever you connect to the Internet, your internet provider usually gives you an IP address according to your geographic location. Geo-restriction is a system where some IP addresses are blocked from accessing channels and websites because of copyright restrictions. Due to this, you won’t be able to unblock, access, or stream content that is restricted from your location.

It is very lawful, since all the documentaries, shows, series, and films are properties of other people. So, it is only right that the individuals who own them are financially compensated. This is why the appropriate walls are constructed to forbid your access to watch and stream US TV in France.

How can I lift the geo-restriction?

To learn how to bypass or unblock geo-restrictions and watch American TV in France, we recommend using a VPN. Short for Virtual Private Network, a VPN is a network of remote servers, situated in different locations in the globe.

When you use a Virtual Private Network, you only need to select the remote server of the country you want. Then, connect via this chosen server to the Internet and a VPN will give you the IP of the server.

Therefore, rather than using your IP address that’s given to you by your internet provider, you can use a VPN. This way, you’ll be given an American IP address from a remotely located server in the United States and easily unblock, access, or stream US TV in France.

The best 3 VPNs to watch US TV

While there’re many VPNs in the market, we don’t expect you to buy and test 480+ VPN services as we also mentionned in our review of the best VPN in Canada.

So, “how can I know which VPN is the best for me in France?”

We’ve reviewed three of the best ones below to help you answer that question. 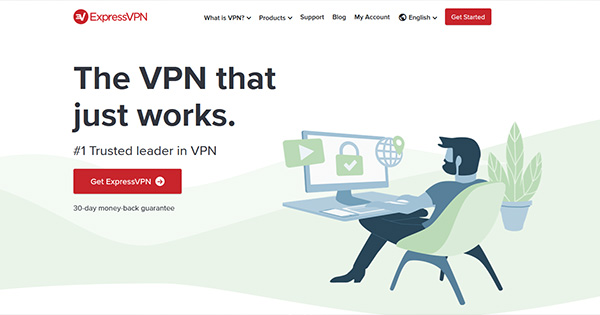 ExpressVPN is by far the fastest VPN in the world, and it delivers those lightning speeds whilst maintaining a very high level of privacy and security. The VPN has thousands of super-fast servers in almost 100 countries around the world. Thus, it shouldn’t surprise anyone that it is our top pick to access, stream or watch US TV in France.

For optimum security, the VPN uses military-grade encryption and multiple security protocols. What’s more, it features a rare split-tunneling feature which enables you to select which applications utilize the tunnel and which ones directly access the web. This further enhances your speed while you unblock, stream or watch your favorite US TV shows in France.

With a verified no-logs policy and sophisticated features such as an inbuilt kill switch and public Wi-Fi protection, there is no need to worry about any data retention law while you unblock, access or watch US TV in France. Besides, the company offers compatible user-friendly app for almost every platform. And if you have more than one device, you’re allowed to connect up to 3 devices simultaneously.

While it’s not cheapest option around, a risk-free 30-day money-back guarantee means you can easily try it without any risk. Moreover, the company offers you a 49% discount and a 3-month free subscription on every 12-month subscription purchased.

Enjoy the 49% discount from ExpressVPN > 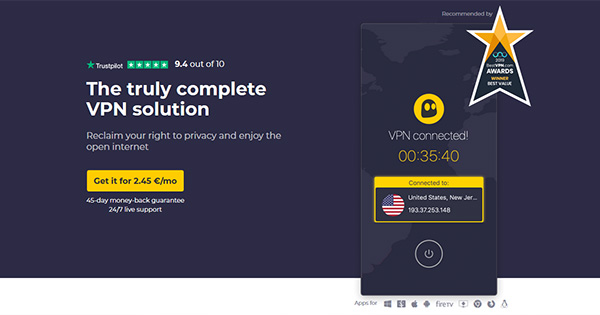 Following a reshuffling in management last year, Romania-based CyberGhost has massively improved its service. Offering robust encryption, a stream of advanced security features, super-fast speeds and a great customer support, it’s one of the most reliable options in the market.

Operating thousands of servers across 61 countries worldwide, it is easy to see why CyberGhost is one of the ideal options to turn to when you want to unblock, access, or watch American TV in France such as NBC, AMC, ESPN, CBS… “how can I install and use the app?” The app has an inbuilt tutorial to walk you through the entire process.

This VPN secures your internet activities with a wide range of security features, including perfect forward secrecy, DNS leak protection, and an internet kill switch. It also uses military-grade 256-bit encryption, making sure that no one is able to access or intercept your data. In addition, the service won’t log any user data while you unblock, stream, or watch your favorite US TV shows.

Furthermore, the service supports almost every platform, offering compatible apps for Windows, iOS, Mac, and Android. And if you have a large family, the service allows you to share your subscription with 7 devices at a time. 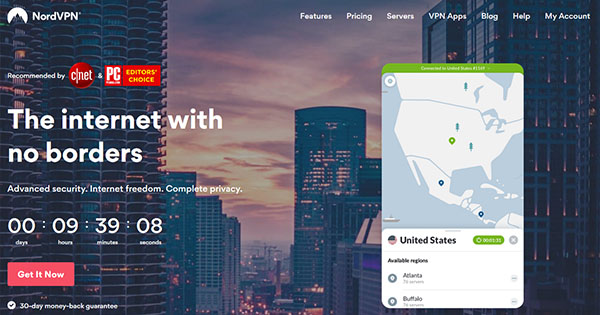 Coming with an extensive variety of features, Panama-based NordVPN is worthy of its spot on this list. This provider also offers thousands of servers across tens of countries around the world. So, it’s one of the fastest and most reliable VPNs to unblock, watch and stream US TV in France.

With the Double VPN feature, the provider also offers an extra protection layer when you access or stream on blocked sites. There are other key protection and privacy features such as DNS leak protection and a kill switch, which protects your data in the event of a connection loss.

In terms of multi-platform support, NordVPN is also one of the best options. It offers compatible apps for every major app like Windows, Mac, iOS, and Android. And with a single account, you can connect up to 6 devices, allowing your friends and family to unblock and access the US TV shows they also desire in France.

To show their confidence in their services, the company offers a 7-day free trial and a risk-free 30-day money-back guarantee. In general, NordVPN offers a lot of reliability, but it’s still a tad slower than ExpressVPN.

Unblock US TV with NordVPN now >

While France is a wonderful country with lots of things to offer you, everything will count for nothing if you can’t stay connected to home through US TV. “How can I ask unblock and watch US TV in France” was a question you were asking at the beginning of this article, but we’re confident your question has been answered by now.