Home » Streaming » How to Watch Darling in the Franxx on Netflix? Unblock It With a VPN!
Streaming

Darling in the Franxx is one of those hidden gems of the Japanese anime culture. With amazing 24 episodes available, you’ll enjoy amazing storytelling and writing from start to finish. But, the bad news is that many people can’t watch Darling in the Franxx on Netflix simply because it’s not available. Or is it? Well, that’s what I’m going to discuss today, so make sure you stay with me and keep reading, as I will teach you how to access this show on Netflix easily.

Darling in the Franxx Season 2 – Is It Available?

Anime series like Death Note, for example, is known for having only one season, with no continuation in the plan. If you take a look at Darling in the Franxx, you’ll see exactly the same principle. This series comes with only one season consisting of 24 episodes.

Is Darling in the Franxx Season 2 coming to Netflix? I wouldn’t say so – at least not yet.

Is Darling in the Franxx on Netflix?

However, is this show on Netflix at ALL? Well, the good news is that you can indeed find Darling in the Franxx on Netflix, although that’s not the case for the majority of people. If you didn’t know, Netflix bases its libraries depending on your location.

So, not every country gets the same set of movies and shows, making Netflix a vastly different experience in various regions. Shows like this are extremely rare and are usually available on a handful of Netflix catalogs. The situation is the same here. 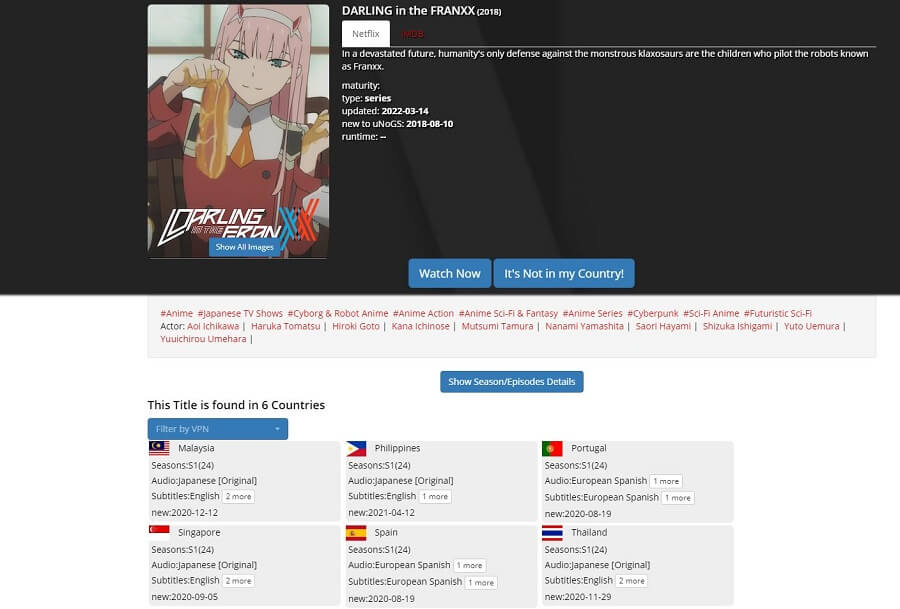 If I check this uNoGS.com website, I’ll see that the series is available in exactly 6 countries. As you can see, these include Malaysia, the Philippines, Portugal, Singapore, Spain, and Thailand. Since I’m going to be using a VPN to unblock the series, I will use Netflix Spain as an example.

How to Unblock & Watch Darling in the Franxx on Netflix?

So, since Darling in the Franxx is available on Netflix Spain, what does that mean? In simple terms, it means you have to be located in Spain to watch it or simply get a Spanish IP address. Thankfully, you can go for the second solution that involves using ExpressVPN.

ExpressVPN lets you change your IP address to any of its 94 countries. Therefore, you make any website you visit see you as if you’re located in another country, which is in this case Spain. And, as a result, Netflix will see your location as Spain, giving you access to all 24 episodes of this show.

Here’s how to use ExpressVPN to watch Darling in the Franxx on Netflix: Unfortunately, in the Spanish Netflix catalog, this series doesn’t have English subs. If you speak Spanish, that’s not an issue, given that Spanish subtitles are available. However, if you want English subs, you’re going to need Substital.

Substital is a browser extension that you can use to add subs to any show or movie on Netflix, in any language. You can download it for Chrome or Firefox and it works only on PC. Once you do it, open the extension and use the search bar above to search for subtitles for this show.

You can also set the language you want from the drop-down menu, and Substital will give you choices from its database. Alternatively, you can download subtitles from a third-party website and upload them through Substital, which will give you the same result.

Which VPN Should I Use?

As said, I recommend using ExpressVPN to watch Darling in the Franxx on Netflix.

This VPN is the most reliable choice for unblocking different Netflix libraries, but also other geo-restricted platforms. It comes with more than 3,000 servers in 94 countries globally, which includes Spain, the US, the UK, Canada, and many other locations.

Moreover, ExpressVPN gives you the fastest speeds. With great performance, it’s great for streaming in 4K without excessive buffering, even on more distant VPN servers. I also like ExpressVPN’s ability to unblock BBC iPlayer, Disney+, and HBO Max.

This adds to its streaming capabilities that perfectly complement its rock-solid security. Speaking of which, this VPN will give you the strongest encryption, a kill switch, and a proprietary Lightway protocol. A no-logs policy is also here, meaning that ExpressVPN stores no logs of user data.

ExpressVPN has applications for all platforms and devices, which is a huge plus. Add to that 5 simultaneous connections and reliable 24/7 customer support, and you have a complete package that comes at an affordable price.

By the way, let me remind you of its 49% discount and 3 months free for the annual plan. Get it by using the button below!

Watch Darling in the Franxx on Netflix With ExpressVPN >

So, as you can see, watching Darling in the Franxx on Netflix is quite simple. All you have to do is get a Spanish IP address from ExpressVPN, which will give you access to Netflix Spain. By doing so, you can also watch this series no matter your location.

In the end, I would also recommend avoiding free VPNs. They don’t work with Netflix and pretty much none of them have servers in Spain. Not to mention their limited bandwidth and slow speeds that won’t allow you to enjoy the show to the fullest.

With ExpressVPN, you get no security risks, yet, you enjoy the best possible performance and the ability to unblock Netflix. After all, there’s a 30-day money-back guarantee, so you can get a full refund without losing any money, after watching the series.

I would say it sounds fair – don’t claim otherwise!