Home » Streaming » How to Watch Boruto on Netflix [With English Subs] : Just Follow These Steps!
Streaming

For true fans of Naruto, Boruto aims to bring the same thrill and amazing fights that anime fans will appreciate. However, while the show is very popular, it’s pretty hard to find it on Netflix, given that it’s available in just a few libraries. If you really want to watch Boruto on Netflix, this is a big issue – the one that we’re going to solve today. Therefore, stick with me and I’ll show you how to watch it with English subs easily.

Is Boruto on Netflix?

The first and obvious question for many users is – is Boruto on Netflix? Well, if you live in the United States, UK, Canada, or Australia, you won’t be able to find this show. As a result, you’ll think that it’s not available when in reality, it exists on Netflix.

However, Netflix offers different catalogs of shows and movies depending on your location. This means that we all see different catalogs, and we need to be located in specific regions to be able to access certain movies and shows.

But, if you check this uNoGS.com website, you’ll be able to see on which libraries you can find Boruto: Naruto Next Generations. 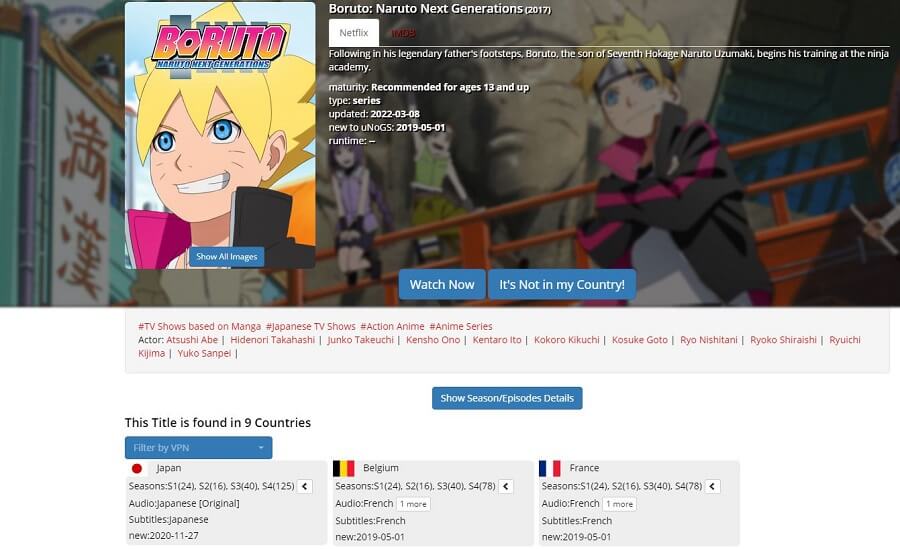 As you can see, it’s available in 9 countries in total, with the most seasons and episodes in Japan. Unfortunately, it comes only with Japanese subtitles, but in a minute, I will show you how to fix this issue.

For now, all you need to know is that you need to be located in Japan to watch Boruto on Netflix.

How to Watch Boruto on Netflix With English Subs?

And of course, this begs the question – is there another solution? Well, there actually is, and that is by using ExpressVPN to get a Japanese IP address. By doing so, you’ll make Netflix believe that you’re located in this country and access the show without problems.

Get a Japanese IP With ExpressVPN >

Here’s how to do that: 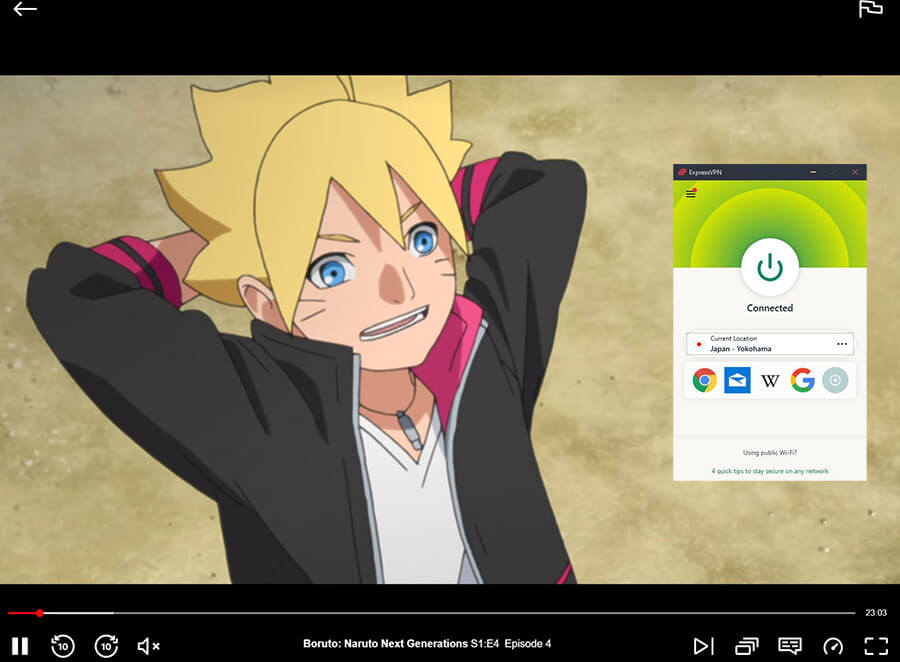 Let’s now talk about how to add English subtitles to this show. Beware that this solution works only on PC and only on Chrome and Firefox browsers. Furthermore, you’ll need a browser extension called Substital that you can download for both Chrome and Firefox for free.

ExpressVPN – The Best VPN to Watch Boruto on Netflix

ExpressVPN is the best VPN to unblock Netflix shows and movies, which includes Boruto: Naruto Next Generations.

This VPN offers more than 3,000 servers in 94 countries, with many of them in the US, UK, Japan, Canada, and Australia. With these servers, you can unblock more than 15 Netflix catalogs and enjoy pretty much any show or movie effortlessly.

Moreover, I like it because of its speed. It’s the fastest VPN you can get, which is crucial for streaming without buffering, both in HD and Ultra HD. We also need to point out its security, which is on the top level.

Apart from bank-grade encryption, ExpressVPN comes with a no-logs policy, granting maximum privacy. Furthermore, it can be installed on every platform and device, with 5 simultaneous connections on a single subscription.

And of course, there’s 24/7 customer support, should any issues arise. That shouldn’t happen, given that ExpressVPN works flawlessly and is one of the best VPNs for streaming. Don’t forget to get its 49% discount and 3 months free for the annual plan, by the way. 😉

Watch Boruto on Netflix With ExpressVPN >

Can I use a free VPN to unblock Netflix movies and shows?

No, you can’t. Free VPNs cannot unblock any Netflix libraries, so you can’t use them to unblock movies and shows. That aside, they also offer limited monthly bandwidth and very slow speeds, which makes them unsuitable for streaming.

Because of their questionable logging practices, I also don’t recommend them for online privacy and security. However, ExpressVPN is a much better alternative, giving you unlimited bandwidth, impeccable security, and great performance.

How many seasons of Boruto are available on Netflix?

At the time of writing this article, you can find 4 seasons of Boruto, but there are 5 of them in total. We don’t know when and if List 5 (season 5) will be released on Netflix. If that happens, though, you’ll probably find it on Netflix Japan.

Can I use ExpressVPN for anything else?

Sure. Unblocking Netflix is only one of many things ExpressVPN can do for you. A VPN like this will preserve your online privacy and prevent your information from getting into the wrong hands.

Many other benefits such as anonymous torrenting, browsing the dark web safely, and saving money on flight tickets will also be available.

Where can I check if a movie/show I want is available on Netflix?

You can use uNoGS.com, as said earlier. This website will let you see which movies and shows you can find on different Netflix catalogs. And, since it’s frequently updated, it has a high degree of accuracy.

Netflix is known to periodically change its libraries and remove/add movies and shows. However, by using this site, you can keep up with these changes and unblock shows and movies accordingly.

Watch Boruto on Netflix With ExpressVPN >