How to Watch 2022 French Open Live – Try This Simple Trick!

The French Open (Roland-Garros) offers some thrilling tennis matches and blood-boiling moments that tennis lovers enjoy. This tournament plays on clay and is usually played from September to October. For users who can’t access live streams of this tournament, we’ve come up with a special guide to fix this issue. Wanna find out how to watch Roland-Garros live for free? Let’s show you a simple trick!

Where to Find Roland-Garros 2022 Live Stream?

The great thing about streaming sports is that your local sports TV channel will often broadcast some of the French Open matches. But, if you know how big grand slams are, you know that there are plenty of matches during the day.

One day, your local TV might broadcast a match that you don’t want to watch. Maybe you want to watch Nadal and not Djokovic, and vice versa. In this case, you’re left powerless, with no control over what you want to see.

Well, these days are over thanks to numerous online streaming platforms. Sports streaming platforms are abundant on the internet, but almost all of them are paid. But what if we told you that we have a completely FREE solution to this problem?

You can watch Roland-Garros (also known as the French Open) 2022 live for free on the France TV website (https://www.france.tv/sport/tennis/roland-garros/).

Another platform is ITV4, but this is not our recommended pick. Why? Because it doesn’t have all matches, so you can’t enjoy complete coverage of the tournament. From now on, we’ll focus on explaining how to watch Roland Garros on France TV instead.

What Is France TV?

France TV is exactly what it sounds like. A group of French TV channels that all broadcasts diverse content, ranging from sports to TV shows and entertainment programs. If you visit the Sports category, you’ll immediately see that Roland-Garros 2022 is available.

Here’s how it looks: 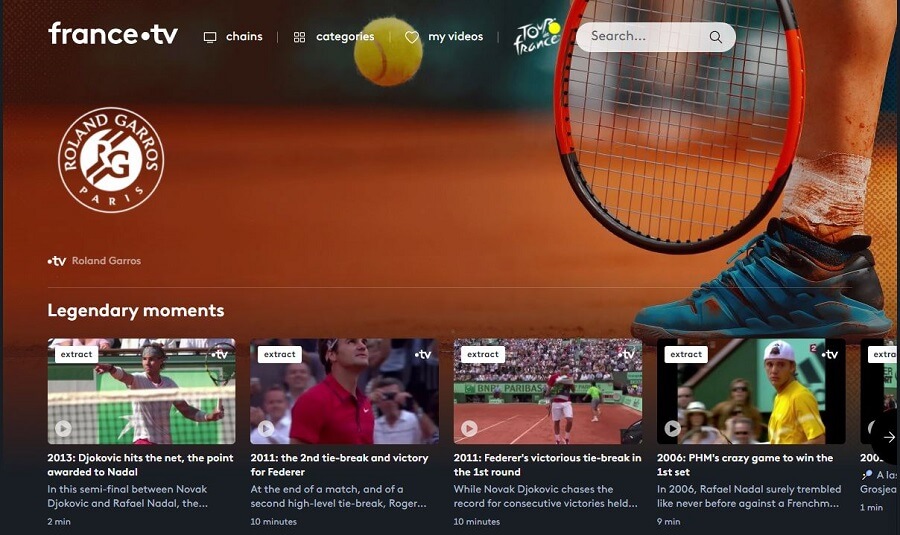 Once the tournament starts, this screen will look a bit different and you’ll get the options to stream various matches during a particular day. There’s a catch, though – France TV is available only for users located in France – uh-oh! 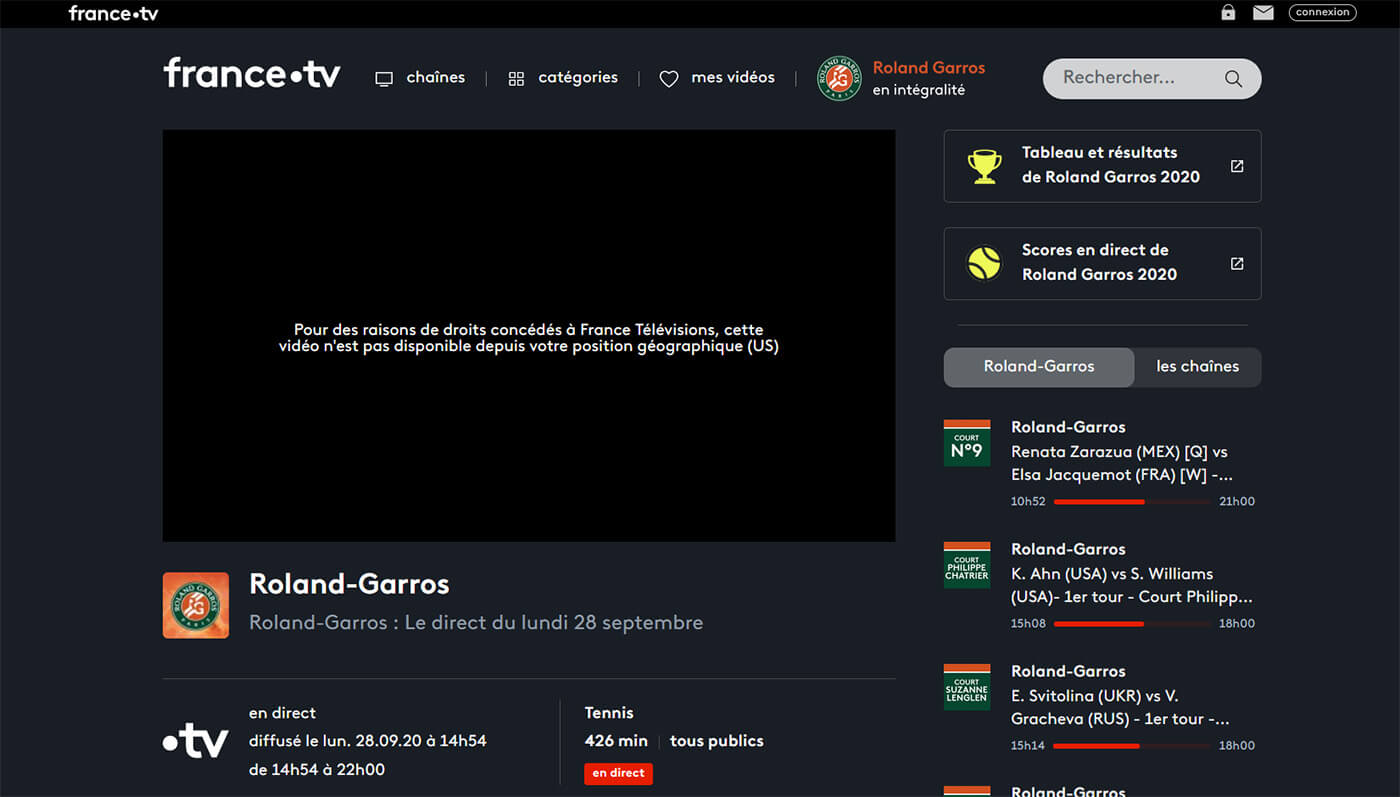 The only way you can watch Roland-Garros from anywhere in the world is by using a VPN. We have a list of really cheap VPNs that will help you do so, but before we delve deeper, let’s see how to actually use them to your advantage.

How to Watch Roland-Garros 2022 Live Stream?

As said, a VPN is here to help you bypass geo-restrictions such as this one. You connect to a server in a different country, gain a new IP, and start streaming content tailored to that country.

This way, you can get a French IP, which will allow you to access France TV for free, for instance. Moreover, this service keeps your connection secure, thanks to military-grade encryption and rock-solid security.

So, how do you use a Virtual Private Network to unblock and watch Roland-Garros live-stream on France TV? Here are the steps:

Obviously, the first step is to get a subscription. We recommend ExpressVPN for this purpose, as it’s the most reliable and most capable of unblocking sports-streaming platforms.

Already subscribed? Good – download the apps you’re going to use. After that, sign in with the credentials you provided upon registration and the app will greet you with a home screen.

3. Connect to the French Server

From there, click on the country underneath the connection button to open the server list. Scroll down until you find France and choose the server you want. To do so, double-click on the server and ExpressVPN will automatically establish a connection.

Now that you have a French IP, you can access France TV and stream Roland-Garros for free once it starts. 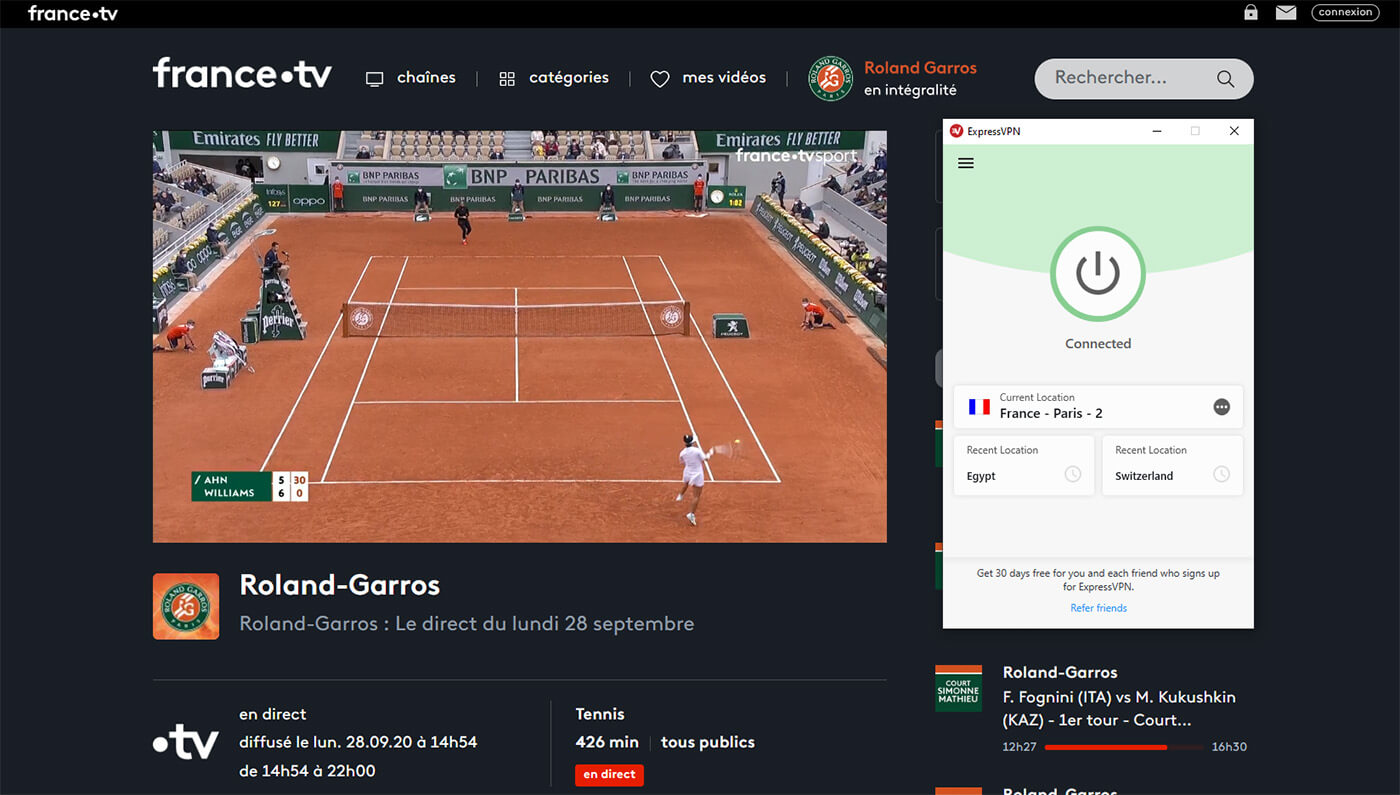 Proof that you can watch the French Open live on a free TV Channel (with ExpressVPN!)

Video tutorial on how to watch French Open live on a free TV Channel :

Streaming fast-paced sports such as tennis requires a stable and fast internet connection. Not all VPNs can give you that luxury but our top 3 picks from below are the exceptions. Therefore, here’s our list of best picks for streaming your favorite grand slam:

ExpressVPN represents a pinnacle of the VPN industry, and as such, it’s currently the best choice. This provider combines blazing-fast speeds with ultra-secure connections to achieve what many other VPNs cant.

It has 3,000+ servers in 94 countries, some of which are in France. These servers are very fast, so you can enjoy the 2022 French Open from anywhere in the world. What makes ExpressVPN so special is its ability to bypass geo-restrictions.

Sure, you’ll unblock France TV but that’s not all! There’s Netflix, HBO GO, Hulu, BBC iPlayer, and many other services that will be at your palm’s reach. Moreover, you get impeccable security, consisting of 256-bit encryption coupled with a Kill Switch.

ExpressVPN maintains a zero-logging policy, which will ensure complete privacy during your online journeys. We like that it’s available on every platform, so you shouldn’t worry about its mobile, tablet, laptop, or router support.

In terms of connectivity, you get 5 simultaneous connections on a single account. The provider’s support is also in place, and is here to provide help 24/7, should you encounter some VPN-related issues.

Last but not least, ExpressVPN is on a huge 49% discount at the moment. It applies to the annual plan, where you also get 3 months free. Sounds good? Find out more about it below!

Are you looking for an affordable, yet premium VPN? Look no further than CyberGhost. This provider is all you need for bypassing geo-restrictions, with its 7,000 servers in 90 countries around the globe.

It has many servers in France, allowing you to unblock France TV to gain access and watch Roland-Garros live stream. CyberGhost, apart from its servers, is known for pretty good speeds. Almost rivaling ExpressVPN, it’ll provide a substantial streaming experience for the money.

Another thing you’ll like is its ability to unblock platforms. We managed to access Netflix, Hotstar, ABC, and DAZN with it. Being from Romania, CyberGhost is located in a pretty privacy-friendly jurisdiction. It maintains a zero-logging policy, and therefore, preserves your online identity.

Speaking of privacy, its security is top-notch. CyberGhost uses 256-bit AES encryption, all while its automatic kill switch protects you from accidental IP and DNS leaks. One feature you’ll often use is dedicated servers.

You have servers for streaming or torrenting, letting you perform bandwidth-hungry activities with ease. CyberGhost’s 3-year plan is very cheap and comes with a 45-day money-back guarantee. If you’re thinking of buying it, this is our recommended option.

This plan includes every feature we mentioned, plus 7 simultaneous connections. Beware that this VPN doesn’t work in China, so if you’re from this country, we recommend either ExpressVPN or NordVPN.

Did someone say NordVPN? This is our last pick for today, but that doesn’t mean it’s bad. Actually, it’s pretty damn good! NordVPN is a security-oriented provider that doesn’t lack features or performance in any department.

It has lightning-fast speeds which it combines with 5,600+ servers, for supreme reliability and bypassing geo-restrictions. Want to watch the French Open stutter-free? No problem, connect to one of its servers in France and unblock it in a blink of an eye!

NordVPN will let you unblock any site, more or less, with the addition of its military-grade encryption. To make things better, IP/DNS leak protection is in place, and a kill switch is here to protect your online identity, should the connection breaks.

If you’re easily annoyed by ads, the provider has a CyberSec feature that acts as an ad-blocker. It blocks ads and trackers, making web pages clear and smooth. As an additional improvement, NordVPN included a NordLynx protocol that increases speeds for more performance.

We can all agree that this is not the cheapest option out there. However, for the price, it’s really a good deal. Features like Double VPN and obfuscated servers make this claim more relevant, and you even get 6 simultaneous connections on a single subscription.

NordVPN’s best deal is a 2-year plan with a 30-day refund period for those who don’t like it. But, given that you get unlimited bandwidth, fast speeds, and lots of servers, what’s not to like here?

Can I Use Free VPNs to Watch the French Open Live?

Well, you could technically use them, but you need to be prepared for severe limitations. Free VPNs come with limited bandwidth and slow speeds that will only hinder your browsing experience.

Usually, we’re talking about 500 MB to 10 GB a month, which isn’t enough to burst through the whole Roland-Garros tournament. The reason we said “technically” is that some free VPNs will work, although not to a full extent, given their unavoidable limits.

Speaking of limits, you also need to know that many of them can’t properly unblock streaming platforms. This will prevent you from accessing your favorite streams altogether, mission out on important moments.

Lastly, these providers usually store logs of your activity and personal info, which they later sell to third parties. Maintaining VPN servers is expensive and since they provide services for free, they must earn money somehow.

That being said, we DO NOT recommend free VPNs for streaming the 2022 French Open live. Our suggestion instead is ExpressVPN, and although it’s a bit more expensive, its performance is unparalleled, making it more than worth the cash.

As for non-paid solutions, you can check our list of the best free VPNs in 2022. But don’t expect them to be one the same level as premium offerings.