How to Watch Brooklyn Nine-Nine Season 8 on Netflix? Just Follow These Steps!

Brooklyn Nine-Nine reinvented the crime genre with clever comedy elements that permeate the entire show. With each new season, this show becomes better, and with season 8 out, hardcore fans are even more eager to get back to it. Sadly, finding Brooklyn Nine-Nine season 8 on Netflix isn’t that easy, as it’s not available on every Netflix library. However, I will show you how to fix this issue and enjoy season 8 of B99 on Netflix no matter your location. Ready? Let’s set sails!

Where Can I Watch Season 8 of Brooklyn Nine-Nine on Netflix?

The main question is where you can find season 8 of this show. As you (probably) know, Netflix offers different libraries of movies and shows according to your location. So, in one country, the show you want is available natively, while in your country, you can’t access it at all.

Luckily, Brooklyn Nine-Nine on Netflix is available pretty much everywhere. This includes even the largest catalogs like Netflix Canada, Australia, the US, UK, France, and many more. Unfortunately, though, as we speak only one library has the season 8.

Take a look below: 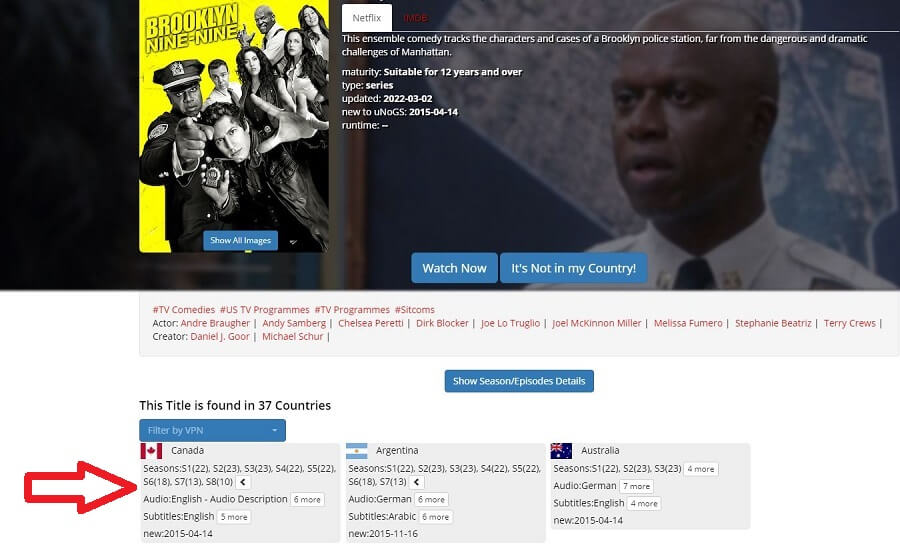 Judging by the website uNoGS.com, Brooklyn Nine-Nine season 8 on Netflix can be found only in Canada. Of course, you can find all other seasons here as well, and you get English subtitles as standard. So, what does this mean?

Well, it means that to watch this season, you need to fulfill one of two conditions. One is to be located in Canada and the other is to have a Canadian IP address. We opt for the second solution, as it’s much easier and less expensive.

How to Watch Brooklyn 99 Season 8 on Netflix?

Now, how to get a Canadian IP address and unblock all seasons of Brooklyn 99 on Netflix? For me, the best solution is to use ExpressVPN.

ExpressVPN is a VPN that lets you change your IP address to any of the 94 countries that it offers. Once you get a Canadian IP from ExpressVPN, Netflix will see you as if you’re located in this country and give you access to the Canadian Netflix library.

As a result, you’ll be able to find all seasons of Brooklyn Nine-Nine and watch them no matter your location. Here’s how to do that: 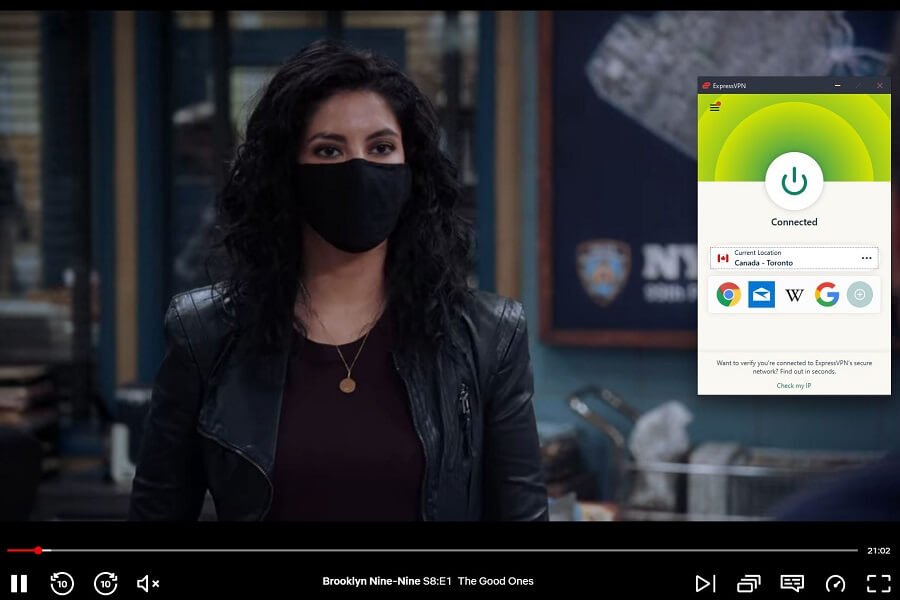 The reason I recommend using ExpressVPN is that it’s the best solution to unblock Netflix shows and movies.

As you can see in the screenshot above, ExpressVPN successfully unblocks Netflix Canada. Moreover, this VPN comes with 3,000+ servers in 94 countries globally, making it suitable for bypassing geo-restrictions like this one. What about performance?

Well, you’re looking at the fastest VPN on the market. This means that it’s suitable for streaming in 4K on Netflix, but also watching BBC iPlayer, Disney+, or Hotstar smoothly. ExpressVPN’s forte is also security. I know, it doesn’t matter the most for this purpose.

However, while using it, you can enjoy military-grade encryption and a certified no-logs policy, granting the maximum level of privacy. Furthermore, ExpressVPN works with more than 15 Netflix libraries, so you can unblock Netflix US as well.

Besides, ExpressVPN supports all platforms and devices. Apart from Windows, macOS, and Linux, this VPN works with iOS and Android phones, Smart TV, routers, and Firestick TV.

With 5 simultaneous connections on one subscription and 24/7 customer support, ExpressVPN is a complete package that’s not too expensive either. After all, you can get its 49% discount and 3 months free for the annual plan simply by clicking on the orange button below.

Watch Season 8 of Brooklyn 99 With ExpressVPN >

Free VPN for Netflix – Should I Use It At All?

Okay, so should you use a free VPN if you want to watch Brooklyn Nine-Nine season 8 on Netflix?

The answer to that question is a resounding NO.

Free VPNs come with many downsides that, sadly, include limited bandwidth and poor speeds. As a result, you won’t be able to watch more than one or two episodes, and that won’t be pleasant due to constant buffering and stuttering.

Perhaps the most irritating thing is that they won’t work with Netflix. You can test out ProtonVPN, Windscribe, Hide.me, or any other VPN, and you’ll see that they can’t unblock Netflix US, Canada, or any other library. Another concerning thing is security – or lack thereof.

Free VPNs not only dumb down on security, but their logging practices are questionable. Since they don’t earn any money through subscriptions, they’ll usually collect and sell your personal info to third parties. That way, they violate your privacy to earn revenue.

That’s why I recommend avoiding them in favor of ExpressVPN which is the polar opposite.

With everything said, you can see that it’s really easy to watch Brooklyn Nine-Nine season 8 on Netflix. At the time of writing this guide, season 8 is available only in Canada, so getting a Canadian IP address is imperative.

However, things are prone to change on Netflix. For that reason, make sure you check uNoGS.com to see on which libraries you can find movies and shows you want. Then, just use ExpressVPN to get a corresponding IP address and enjoy the content to the fullest.

Alternatively, you can use ExpressVPN for many other purposes. Some of them include torrenting safely, browsing the web anonymously, and even saving money on flight tickets.

Watch Brooklyn 99 on Netflix with ExpressVPN >