Home » Streaming » How to Watch My Hero Academia on Netflix? A Trick to Watch All 5 Seasons of MHA on Netflix!
Streaming

My Hero Academia is a popular anime show that started back in 2016. With its latest season, MHA became even more interesting, leaving fans asking for more. Unfortunately, you can’t watch My Hero Academia on Netflix in many countries, which leaves hardcore anime fans disappointed. However, today, I will show you an easy way to access all 5 seasons of this show anywhere by changing your Netflix country.

Is My Hero Academia on Netflix?

Okay, so the main question is whether or not you can find My Hero Academia on Netflix. Logically, the answer is positive, as the show can be found in more than 20 Netflix catalogs. Sadly, people living in the US, Canada, or Australia won’t be able to find it at all.

On the flip side, many Netflix libraries offer this show, but with just one or two seasons. This is all but enough to enjoy the full glory of this awesome series. So, let’s check this website called uNoGS.com. 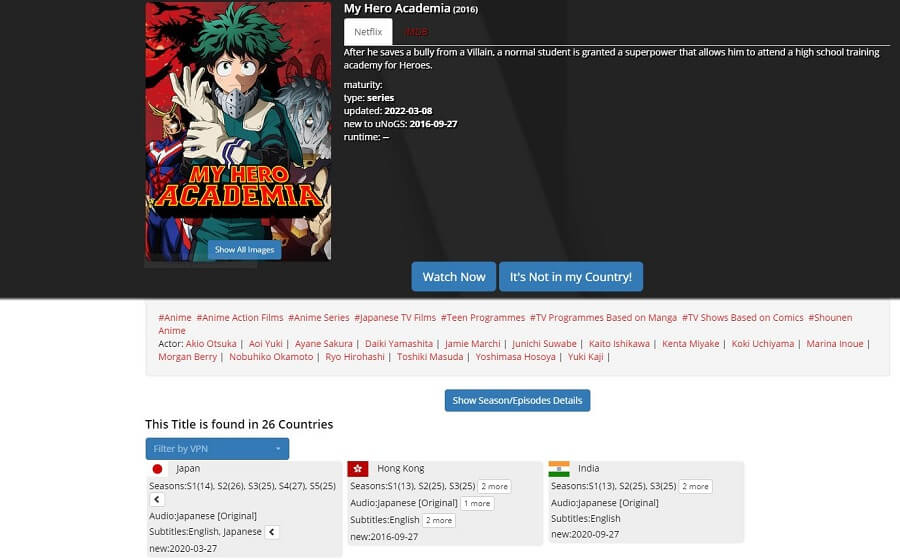 Here, we can see which movies and shows are available on which Netflix libraries. Therefore, after looking for My Hero Academia, we can see that it’s available in 26 countries.

Albeit, all 5 seasons are available in Japan, where you can watch this show with English subtitles. In simple terms, you need to be located in Japan to enjoy all currently available seasons of MHA. How to bypass this problem without traveling to the land of the rising sun?

How to Watch My Hero Academia on Netflix With a VPN?

And this exact question brings us to the solution. You can access this show on Netflix by getting an IP address from Japan, which you can do with ExpressVPN.

ExpressVPN lets you get an IP address from any of its 94 countries, which includes Japan. By doing so, any website you visit will see you as if you’re truly located in Japan, which applies to Netflix, too.

That way, you can access the Japanese catalog without actually being located in this country. Here’s how to do that: 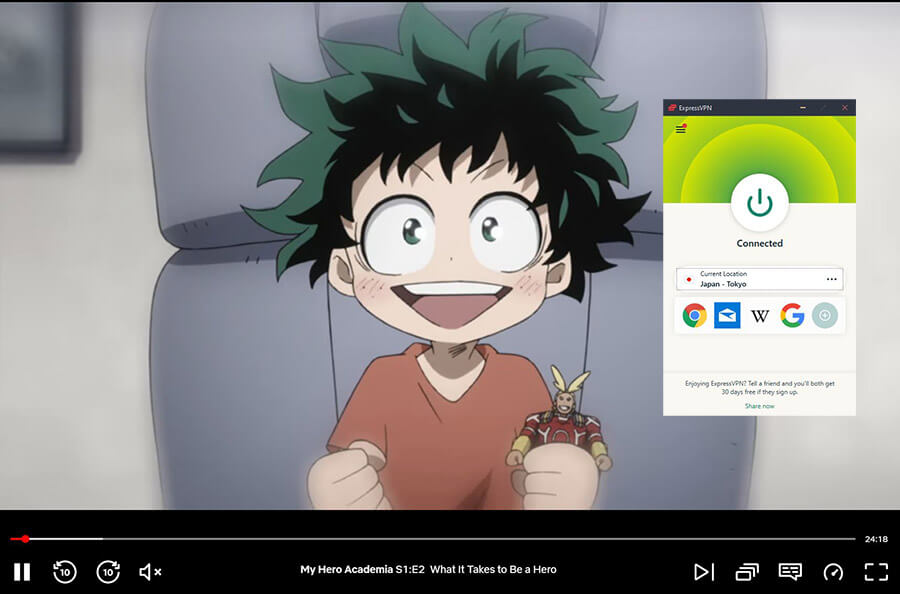 ExpressVPN – The Best VPN to Watch MHA on Netflix

If you ask me about the best VPN for Netflix, I will always point you towards ExpressVPN.

In my tests, it proved to be the most reliable choice for unblocking Netflix, giving you more than 3,000 servers in 94 countries. With this in mind, you can bypass pretty much any geo-restriction and unblock a wide variety of streaming services.

Given its fastest performance on the market, your streaming experience will be buttery-smooth, even in 4K. Streaming side, ExpressVPN’s forte is also security. You not only get 256-bit AES encryption but also a no-logs policy, which guarantees that ExpressVPN won’t store any logs of user information.

Needless to say, this VPN is easy to use, and setting it up takes no more than a minute. However, you will like its 5 simultaneous connections on a single subscription accompanied by applications for all platforms. This is backed up by 24/7 live chat support that will fix potential issues in less than a few minutes.

So, if you’re hell-bent on getting the maximum out of Netflix, you can get ExpressVPN’s 49% discount and 3 months free for the 1-year plan below.

Watch My Hero Academia on Netflix With ExpressVPN >

Before wrapping it up, let’s answer a few frequently asked questions.

Should I use a free VPN for Netflix?

Absolutely no. Or, you can, and you’ll see that a free VPN for Netflix won’t work in any case. Why?

Simply because free VPNs aren’t made with unblocking geo-blocked websites in mind. While they offer so-called “forever free” plans, they tend to lack in many departments. For instance, they give you limited monthly bandwidth and very slow speeds.

This not only limits your streaming but also makes the footage blurry and constantly buffering. Performance aside, free VPNs aren’t safe to use because of their logging practices. They do store logs, and to earn money, they sell the collected information to third-party companies, violating your online privacy.

For a small monthly fee, you can get ExpressVPN instead and forget about these issues. And, to be honest, that’s what we always recommend if you don’t want to risk leaking your personal information to the public eye.

Can I watch My Hero Academia on Netflix everywhere?

You can watch My Hero Academia on more than 25 Netflix catalogs, so it’s clear that the word “everywhere” isn’t appropriate. While MHA is available in many libraries, watching all seasons of this show is possible in just a few of them.

We recommend going for Netflix Japan in this case, simply because the solution I presented works best in this scenario.

Netflix Proxy Error while using a VPN – what can I do?

Well, you can probably either change the server that you’re using or change your VPN. Sometimes, VPNs are detected by Netflix and Netflix reacts by blocking your access to the site or show/movie.

If this happens, you can try switching from different servers and see if the problem goes away. However, if you’re using a free VPN, you’ll need to get a premium one, like ExpressVPN, and the problem will probably disappear.

Watch My Hero Academia on Netflix With ExpressVPN >