The Best VPNs for Hong Kong – Enjoy Your Privacy and Anonymity!

Hong Kong residents have a good reason for using a VPN. This city belongs to the special administrative region that is one of the rare areas where people can enjoy the internet freely. However, this freedom is threatened by the influence of Bejing. According to Freedom House, Hong Kong now has a “partly free” ranking. This means that your privacy could be compromised due to government surveillance. Because of that, using a security service in this city is almost mandatory if you want to avoid these problems.

Despite numerous privacy issues, this region has its share of VPN servers. Some of the best providers have their servers there and these are our top picks:

Using a VPN in Hong Kong is very easy. You need to buy the desired subscription and install the respective app. Use the app to connect to a server in this city and you’re ready to explore the internet privately!

Why People in Hong Kong Use a VPN?

Although Hong Kong is far cry from the rest of China, we think that this might change in the coming years. The reason for this is increased government surveillance. While you can still access the same websites, this doesn’t exclude you from surveillance that threatens your privacy.

Here’s why people in this city use a Virtual Private Network:

When it comes to freedom of the press and expression, Hong Kong is the best place to live in China. It’s something that distinguishes this region from the rest of the country. But, Bejing plays a crucial role in the politics of the whole country.

Its influence made Hong Kong’s principles almost obsolete, leading to a drastic decrease in freedom. The proof of that is mainland security agencies, suspected of monitoring pro-democracy activists.

This is why in June 2022, million of protestants went to the streets (and still doing it to this day!).

This city is known for its massive protests, where the protestants were being arrested. Because of that, the government monitors and tracks the political activities of its residents. Even if you aren’t into politics, you can get into trouble if you like something on social media that the government doesn’t like.

On the flip side, you can freely access the internet but there’s a cloud of danger over your head.

Even a free region like this one suffers from geo-restrictions. Websites like Netflix, Hulu, or BBC iPlayer are often blocked for certain countries. You might need a VPN if you want to watch US TV from there, including some of these websites.

This is one of the main reasons many people use a VPN, regardless of geographic location. Luckily, the providers we listed below can grant you access to popular streaming websites.

Back in 2008, Hong Kong launched the GovWiFI initiative. Its role was to make it a wireless city where everyone can access the internet whenever they need it. This mission was successful, as the city’s residents can use the internet even in public transportation.

However, it also has one crucial downside – the Wi-Fi networks are unprotected. Because of this, there’s a certain degree of cybercrime that many users aren’t aware of. If you use a VPN when using public networks, you’re completely protected from cyberattacks.

Using BitTorrent freely is a dream of every nerd. While you can download torrents without it, you aren’t anonymous, posing a threat of the government detecting you. Some countries can charge you a hefty fee if you’re caught downloading pirated content.

For that reason, Hong Kong residents often use a VPN. It allows them to download torrents in an infinite amount without being detected.

The Best VPN for People Living in Hong Kong

Not all Virtual Private Networks are the same, hence the difference in pricing and features. When it comes to its usage in Hong Kong, you should look for these qualities:

Our top picks are:

Let’s take a closer look at these providers’ offerings.

ExpressVPN is a provider with no weak points. Even Reddit users have ranked it as the best VPN provider of the year. Believe us when we say that it’s the fastest provider on the planet, both when downloading or uploading.

While it isn’t the largest company, its 3,000+ hasty servers in 160 locations provide more-than-sublime performance. Of course, Hong Kong residents have their share of these. When it comes to unblocking geo-restricted websites, you aren’t going to find a better provider.

You can enjoy Netflix, HBO, Hulu, BBC iPlayer, Amazon Prime Video, and many more within seconds. This is realized by its MediaStreamer feature. To balance things up, ExpressVPN also shines security-wise.

Did you think a provider like this would miss something?

There’s a sheer power of military-grade encryption, as well as Open VPN and P2P support on all servers. If the servers fail, which never happens, there’s a kill-switch to prevent your IP from leaking.

Even 24/7 customer support is top-notch, making every dollar you spend here worth.

CyberGhost is one of the best providers in the world. It’s an all-rounder that will satisfy all needs, even if you’re the pickiest person. There are tons of useful apps that require just a couple of clicks to set up.

Beginners, or should we say noobs, will feel like experts shortly after booting it for the first time.

The VPN provider has a couple of high-speed servers in Hong Kong and more than 7,000 servers worldwide. This ensures that you can access any website on the planet with a single click or tap if you’re using a smartphone.

Speaking of that, CyberGhost has overwhelming device support.

A VPN can even be used on a Firestick to enjoy many benefits! Aside from that, Linux, macOS, Android, Windows, and other main platforms are supported. There’s a 45-day money-back guarantee, sitting there like icing on the cake. 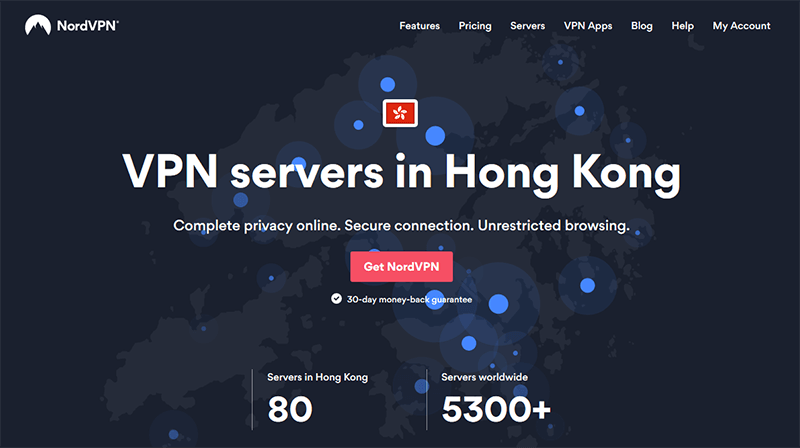 NordVPN is Panama’s magnum opus. If you don’t know anything about Panama, here’s a perfect introduction. This provider is miles away from the 14 Eyes, so it isn’t part of strict data retention laws. This means that they operate with a strict zero-log policy.

We have a well-known AES 256-bit encryption, as well as support for Double VPN, NordLynx, and Open VPN. If you’re afraid of malware when downloading torrents, there’s even bonus malware protection called CyberSec.

With over 5,400 servers worldwide, NordVPN has even Hong Kong covered. So, if you want to watch their local televisions, connect to the server and enjoy its high speeds. And if you don’t… well, Netflix, HBO, and Hulu are always there!

Let’s put things into perspective. A reliable Virtual Private Network can offer you more than what you pay for. In a place like Hong Kong where surveillance is getting more strict, this can help you a lot. You’ll be able to stay anonymous all the time, taking care of your security and privacy.

For these purposes, we think that ExpressVPN is THE best choice. It offers everything you need in Hong Kong and even more than that. ExpressVPN now offers a 49% discount and three months free for a 12-month plan.

This is the right time to make a good decision and enjoy your year of safe browsing!