How to Watch 2022 Wimbledon Live – Try This Easy Trick!

Wimbledon is, by many, considered the greatest tennis tournament of all time. This tournament plays in England (London), usually during the summertime, where tennis players are obligated to dress in white, to commemorate the “White Sport” name. With the competition heating up on the ATP list, it’s interesting to see who will be the next winner in 2022. But, to be able to stream every match of Wimbledon, you need to check out our simple trick below.

Where to Find Wimbledon Live Stream?

The internet has a plethora of streaming platforms that display and broadcast diverse content. You’ll agree that there’s no shortage of sports-streaming platforms. However, the main thing here is that they’re usually premium.

This means that you must subscribe, and to subscribe, you need to pay. Now, hardcore sports lovers will probably go for this step. But when you can get something for free, why pay for it? That’s the case with Wimbledon 2022 live stream.

Some of the services that offer it include ESPN and Eurosport, and that’s alright. Our recommended choice, though, is a Swiss channel called RTS.

In terms of popularity, chances are that you haven’t heard about it if you’re not a Swiss resident. But, in Switzerland, this group of channels is very popular, due to the variety of content that it broadcasts.

There are channels like RTS 1, RTS 2, RTS 3, and many others, that all serve TV shows, movies, entertainment, and of course – sports. Visiting the website of this channel is your best bet for accessing all of the content there.

Basically, RTS is a website that encapsulates all of its TV channels, letting you have the exact same experience as on the TV. The main problem with this platform is that it’s based in Switzerland, hence you can’t access its live streams from abroad.

A solution to that is to use a VPN, which is a very powerful service for bypassing-geo restrictions. More about that in the next section.

How to Unblock Wimbledon Live Stream?

What makes VPNs so special? Well, you can use them to save money while traveling or unblock sites such as RTS in order to watch Wimbledon live. This service lets you change your online location, and therefore, bypass annoying geo-restrictions, such as this one.

Moreover, you get impenetrable security and military-grade encryption to make you anonymous online. Okay now, it’s time to see how to use a Virtual Private Network to unblock RTS and watch Wimbledon Grand Slam live in 2022.

Obviously, the first step would be to find a suitable VPN and subscribe to it. We recommend ExpressVPN for this purpose.

Next, when you subscribe, the provider will prompt you to download the apps you need. Do so, open the app, and sign in with the credentials provided upon registration.

3. Connect to the Swiss Server

On the home screen, there’s a big connection button, under which you’ll find a country. Click on it to open the server list. 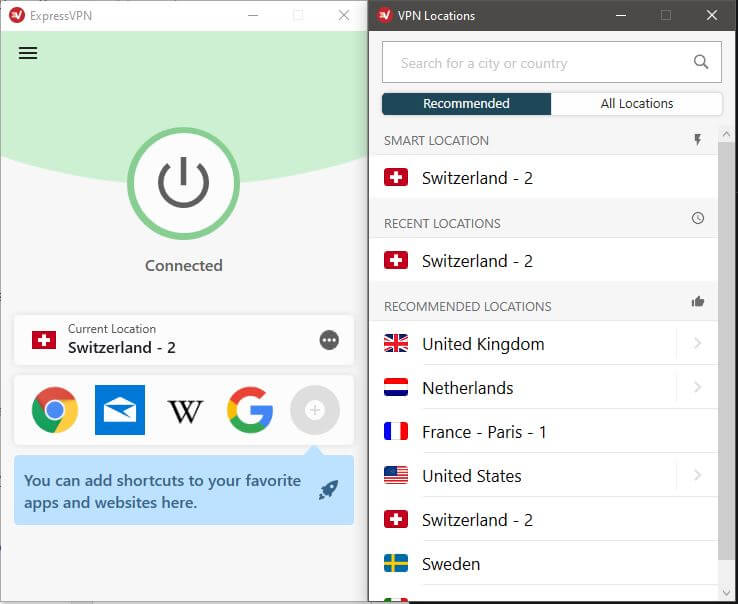 To connect to a server in Switzerland, just double-click on the location and wait for a few seconds. After that, you get a new, Swiss IP, which will let you access websites available exclusively in this country (i.e RTS).

With everything in place, it’s time to visit the RTS website and start watching Wimbledon. Of course, once it starts. 2022 Wimbled on has been already canceled due to the epidemics, but in 2022, we hope to see Djokovic, Federer, and Wawrinka battling their way to the top.

By the way, what are your predictions? Let us know!

When streaming, you want the fastest possible VPN that can unblock any of the sites you want. Luckily, you’re not limited to only one provider, as we’ve made a list of top 3 picks for this purpose. Here are the best choices for Wimbledon lovers:

There’s one thing that ExpressVPN has in common with Nadal – speeds. Both of them are blazing-fast, especially ExpressVPN, which will give you a streaming experience of your time. Speeds aren’t the only important thing, though. What about servers?

Don’t worry, buddy – the provider has 3,000+ servers in 94 countries, and that’s more than enough to bypass geo-restrictions. Apart from RTS, this VPN will unblock Netflix, HBO GO, Hulu, Disney+, DAZN, and many other streaming services.

We like that you can use the VPN on your iPhone, but in this instance, there’s no kill switch. On the brighter side, ExpressVPN is available on Windows, macOS, Android, Linux, and even routers, granting complete protection for your household.

Security-wise, don’t expect it to not fulfill your expectations. There’s a reliable kill switch (except for iOS), 256-bit AES encryption, and superb IP/DNS leak protection. Privacy junkies will also be happy because of the ExpressVPN’s privacy policy.

It’s a no-logging one, recently getting an audit from PwC for its level of privacy. Users who are willing to expand their possibilities further can use ExpressVPN for torrenting. With its fast speeds and impeccable security, this activity will be safe to perform.

Worried about connectivity? Don’t be! You get 5 simultaneous connections here, coupled with 24/7 customer support for solving potential problems. Lastly, ExpressVPN offers a 49% discount and 3 months free for an annual plan, making it extremely affordable in the long run.

Watch Wimbledon for Free With ExpressVPN >

CyberGhost is a great choice for those who aren’t willing to break the bank. Sure, ExpressVPN isn’t all that expensive but CyberGhost reduces its price significantly. We’re talking about its 3-year plan that comes with the highest discount and a 45-day money-back guarantee.

Already excited? There’s more to talk about! One of the highlights here is the presence of dedicated servers. You have servers for streaming and torrenting (a total of 7,000 servers), which you can use as you see fit. Streamers will use dedicated streaming servers capable of unblocking sites like Netflix, Hulu, and RTS.

On the flip side, torrenting servers will let you enjoy P2P activities safely and with decent speeds. Speaking of speeds, CyberGhost is ideal for streaming Wimbledon. You won’t miss a single game or point, thanks to the lack of buffering produced by the great performance.

What we also like is how secure CyberGhost is. It’s from Romania, a country outside the 14 Eyes, so it maintains a clear zero-logging policy. Furthermore, there’s 256-bit encryption in place, coupled with an automatic kill switch that works wonderfully.

CyberGhost can be installed on any platform you want, and it’s quite impressive how good the apps are. Android and iOS apps are particularly intuitive, while the PC app is filled with different features and functionalities.

Unlike ExpressVPN and NordVPN, it comes with 7 simultaneous connections that make it a tad better than both in this regard. Given its router support, you can drastically increase this number – hell yeah!

If you’re tired of searching the market for a great VPN, NordVPN might’ve slid right under your nose. We don’t know if you have a big nose but hey, NordVPN is significantly bigger if that’s enough to make you feel good!

This provider comes with 5,600+ servers in 60 countries. A good server network isn’t just about size, as the provider has some of the fastest speeds out there. The performance is more than enough to enjoy Wimbledon buffer-free in high resolutions, which is all that matters in this case.

Another important thing is its ability to unblock geo-restricted platforms. You can not only watch RTS but also movies on Netflix or awesome TV shows on Hulu. Being from Panama, NordVPN is yet another highly-secure and private VPN.

A zero-logging policy is here, and with military-grade encryption, staying anonymous online will be a breeze. The addition of Double VPN servers is really good. With them, you can apply a double layer of encryption for maximum security.

Not to mention its functional CyberSec feature for blocking ads and trackers. There will be no more pop-ups to ruin your grand slam finale streaming! NordVPN offers 6 simultaneous connections on a single account, granting you access to RTS from any platform.

Plus, its 24/7 customer support does an amazing job of fixing the VPN-related issues, should they arise. If you want to find more about it, smash the button below. You can get a huge discount on a 2-year plan in this case, and save some money for a beverage, to celebrate your great investment!

Can I Use Free VPNs to Watch Wimbledon 2022 Live Stream?

There’s one option we never recommend and that’s using a free VPN for streaming.

This means that you won’t be able to sit through the entire 2022 edition of Wimbledon, so you’ll just waste your precious time. If you’re worried about security, free VPNs should NEVER be your option.

They often store logs of your personal info and browsing habits, which later ends up in third-party hands. By doing this, they violate your privacy and as far as we’re concerned, a VPN’s function is the opposite.

Luckily, you can easily avoid all of the problems by getting ExpressVPN instead. It’s a premium provider but you get an insane value for the money and a VPN that will serve you for years to come.