Home » Tutorials » Is Modern Family on Netflix? – How to Watch It Abroad?
Tutorials

Is Modern Family on Netflix? – How to Watch It Abroad?

Experienced binge-watchers already know what Modern Family is. It’s a mockumentary show that follows the life of a family in Los Angeles, with more than 250 episodes and 11 seasons under its belt. Although it seems like it’s not available on Netflix, it actually is, but you need to do some digging. Today, we’re going to show you which catalog to find it on and how to watch Modern Family on Netflix.

Where to Find Modern Family on Netflix?

Modern Family is a pretty big show that runs for more than a decade at this moment. With its inception in 2009, this show has 11 seasons, one season per year. This is always tricky when we talk about series on Netflix, as some catalogs don’t have every season, so you can miss out on the important parts.

Below is a list of all the catalogs where you can find Modern Family on Netflix with ALL seasons:

The Netflix catalogs we listed below don’t have a complete franchise available:

You’ve probably noticed that the United States isn’t on the list, despite the show being recorded in that country. We don’t know the exact reason for the lack of this show, but on the brighter side, it’s available in many other international catalogs.

If you’re from the last three countries we mentioned, you won’t be able to watch a whole roster of episodes. Conversely, if you don’t live in any of the countries off the list, there is a solution to watch Modern Family on Netflix from anywhere in the world. Keep reading.

How to Watch Modern Family on Netflix?

Netflix is a streaming platform that offers different catalogs of shows and movies depending on your geographical location. The way you can trick it into thinking that you’re from another country is by using a VPN.

A VPN is a service that lets you change your online location, thus bypass annoying geo-restrictions such as this one. Basically, you connect to the VPN server, get a new IP address, and the website sees you as if you were from another country.

Get ExpressVPN to Watch Modern Family on Netflix >

Apart from that, this service lets you browse the web anonymously, protecting you from the prying eyes of hackers and ISPs. Here’s how to use this service to watch Modern Family on this platform:

The first step is to get a provider that will reliably work with this platform. ExpressVPN is the best to use on Netflix, so it’s our recommendation.

Upon subscribing, ExpressVPN will offer you to download the apps for the platforms you’re going to use. Do so, install the app you want, open it, and sign in with the credentials you provided when you subscribed.

3. Connect to the server in one of the countries above

You’ll be now at the home screen where you can see the connection button. Underneath it, there’s a country. Click on it to open the server list. Now, depending on the catalog you want, choose one of the countries from the list. You can go for French servers since they have all the shows in English, for example. 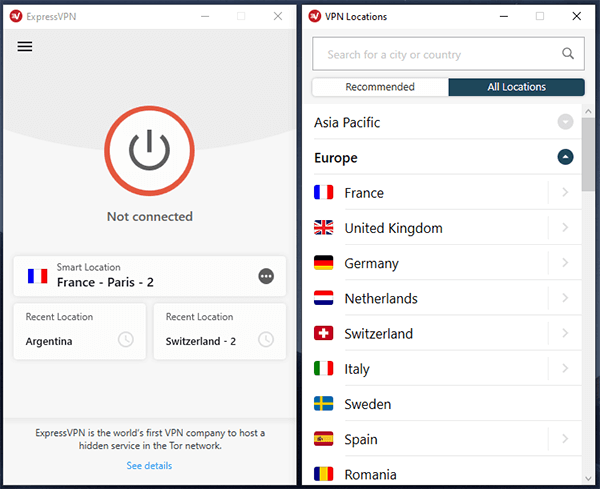 With everything set, you’re free to watch your favorite show on Netflix. It’s very easy, as we promised. And if you want to do it again, just follow the third step. 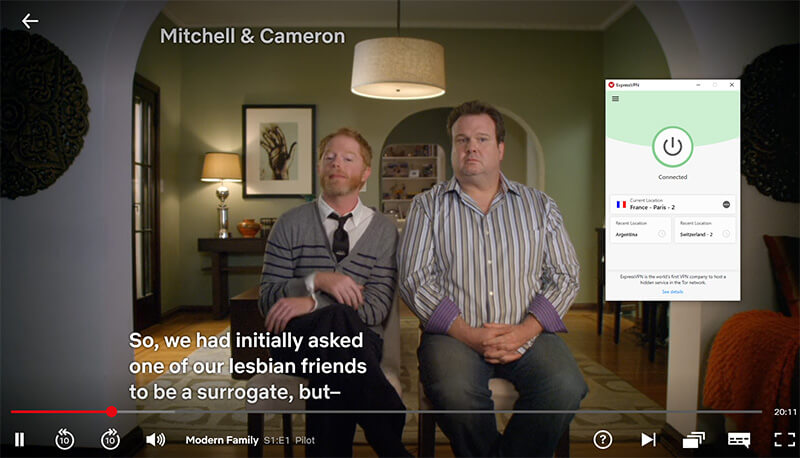 Netflix isn’t a platform you’ll unblock easily, especially if you’re using a provider that’s not up to the task. To save your precious time, we’ll recommend you the option we deem the best – ExpressVPN.

ExpressVPN is the best VPN provider on the market, offering exceptional speeds that are great for streaming and torrenting. Since we’re talking about streaming, let’s not stray away from the topic.

The provider is capable of unblocking not only Netflix but also platforms like Hulu, HBO GO, Disney+, Prime Video, and DAZN. Furthermore, you can watch MotoGP live on platforms like 10Play or ESPN, which is great for those in love with sports events.

Apart from being a great streaming provider, ExpressVPN is very secure. There are 256-bit AES encryption and a Kill Switch. The provider supports every platform, so you can watch Modern Family on Netflix even on iOS, Android, macOS, and Linux.

With 5 simultaneous connections at your disposal, protecting every device in your household will be a breeze. And if potential issues arise, its 24/7 customer support will fix them in no time.

Lastly, ExpressVPN has a very good discount in 2022. The price is discounted by 49% and you get 3 months free for an annual plan.

Can I Unblock Netflix Catalogs and Watch Modern Family With a Free VPN?

In most cases, no. Free VPNs are never a good deal due to the many limitations you’ll be facing.

First off, they don’t have the ability to unblock streaming platforms, especially Netflix. Even if a free provider manages to unblock it, you’ll face another set of issues – slow speeds and limited bandwidth.

Slow speeds will decrease the quality of your streaming experience, while limited bandwidth will not let you binge-watch your favorite shows. Now, from a security standpoint, free VPNs are also a failure.

Whereas paid providers respect your privacy and protect you online, free providers are on the opposite side. They offer weak encryption and collect your data, which they later sell to third parties to earn money. With that in mind, our suggestion is to avoid free VPNs at ALL COSTS!

Do We Recommend More Providers for Modern Family on Netflix?

Yes, there are a few more quality choices that aren’t superior to ExpressVPN but can still unblock Netflix’s catalogs. Our recommendations are NordVPN and CyberGhost. They offer very good speeds, rock-solid security, and are pretty affordable compared to their performance.

NordVPN offers 5,600, while CyberGhost has 7,000 servers worldwide, for successfully bypassing geo-restrictions. If ExpressVPN isn’t to your liking, you can try these two.

But, as we said, with the astonishing performance that ExpressVPN offers, you won’t need another option.