Let’s face it – we all have multiple internet-capable electronic devices at our homes. There are inevitable smartphones, computers, laptops, tablets, and even Smart TVs. While visiting the internet on each device, you expose yourself to the prying eyes of your ISP and the government that can track your activities. Thankfully, a solid VPN will protect all of them given that it supports simultaneous connections. Stay with us to find more about recommended choices!

If you want to use your VPN on iOS, Windows, macOS, Android, and other platforms simultaneously, look no further. Our top 5 picks for protecting every device in your possession are below!

VPN enthusiasts who don’t want to waste a ton of money on this service are better off with Surfshark. This provider is constantly among the top picks, thanks to its reliability, solid speeds, and impeccable security across all the platforms.

As you can see, Surfshark VPN is offering unlimited device covering, which is hard to dislike. This means that you need a single subscription to protect all of your devices and that’s super useful. Price-wise, this is probably the cheapest VPN out there that we can put in the premium category.

It offers 1,700+ servers in 60 countries that allow you to easily bypass geo-restrictions. You can now watch the Champions League on a free TV Channel or unblock Netflix from abroad. What we also like is its intuitive interface that will make using a VPN real joy.

Surfshark is based in the British Virgin Islands, the same location as ExpressVPN, which is far from the 14 Eyes. This is a very good jurisdiction with great privacy laws that will further reinforce the provider’s zero-logging policy.

Furthermore, it uses 256-bit AES encryption for security, coupled with an automatic kill switch for IP leak protection. The addition of an ad-blocker is welcome, and so is the split tunneling feature that works great each time.

Being a zero-log provider, Surfshark will allow you to perform any activity online. You can download torrents, stream some content, or access the Darkweb safely if you want to. With unlimited simultaneous connections, every device will get the same treatment.

That’s how you do this “equality” thing!

Wondering why ExpressVPN made it to the list of the best VPNs for multiple devices despite offering just 5 simultaneous connections? If that’s the case, you know nothing about this provider. ExpressVPN is the best provider on the market in almost any department, except for this one.

5 simultaneous connections aren’t really impressive – we can all agree upon that. However, it’s the sheer performance you get, as well as impeccable security that makes this provider worth a buy.

ExpressVPN has the fastest speeds around, making it great for bandwidth-hungry internet activities. It has 3,000+ servers in 94 countries, where each server is P2P-friendly and capable of unblocking streaming sites.

What’s really good is that it offers router support. Installing it on a router is dead simple and ExpressVPN even offers a special guide for that. This will allow you to protect 16 to 32 devices in your household hassle-free.

Another thing about ExpressVPN is the split tunneling feature. It allows you to choose which apps/sites are going to pass through a VPN tunnel, and which will stay unencrypted. The provider’s apps are intuitive and easy to use, regardless of the platform.

Last but not least, ExpressVPN comes with a huge 49% discount and 3 months free for an annual plan, therefore, making it a great investment in your online security. Oh, and it’s really not that expensive.

Click on the button to get it for the cheapest price EVER!

Get 5 Simultaneous Connections with ExpressVPN

Usually, a cheap VPN can’t do much and that’s an expected outcome for the low price. But not CyberGhost. This is a great multi-device VPN that will allow you to protect up to 7 devices simultaneously, on a single account.

With its affordable price, CyberGhost manages to retain its premium image in the world of cybersecurity. The provider has a massive server network of 7,000+ servers in 90+ countries, which is the largest you’re going to get.

Among its best features is the ability to use dedicated servers. These servers are made for streaming and/or torrenting, so you can use them accordingly. Streaming servers will unblock Netflix, BBC iPlayer, Hulu, and Prime Video, all while P2P servers will allow for safe torrenting.

A very useful feature here is the ad-blocker that will effectively block all ads and trackers. This, in conjunction with 256-bit encryption, will make sure that you browse the web anonymously, for complete privacy.

Speaking of privacy, CyberGhost is from Romania, far from the 5/9/14 Eyes. This means that it can uphold its zero-log policy, which it successfully did for more than a few consecutive years.

If your primary concern is to save as much money, this is the best choice, along with Surfshark. Its 3-year plan yields the largest discount and being a long-term plan, you’ll enjoy complete protection on your 6 devices for years to come.

Protect Up To 7 Devices Simultaneously With CyberGhost VPN

When talking about resounding names in this industry, we can’t go on without NordVPN. This provider exists for more than a decade, and during its existence, it satisfied millions of users around the globe. Satisfied users are always happy, and you’ll also be one of them if you get this VPN.

NordVPN can protect 6 devices at the same time which, by itself, isn’t a very impressive number. But, it’s not always about quantity. Sometimes, you gotta have the quality to prove your worth. Without a doubt, NordVPN is an industry-leading company that has what it takes to impress even the most demanding users.

It has 5,600+ servers across 60 countries, capable of unblocking geo-restricted websites. With this provider, you can watch Netflix, Hulu, or HBO GO from abroad or enjoy torrenting regardless of your location.

Speeds are almost on par with ExpressVPN, so you can forget about buffering and endless loading screens. Moreover, the provider will spoil you with its WireGuard protocol that comes with some insanely-fast connection speeds for a smooth browsing experience.

To accompany such a great feature, there’s 256-bit encryption – the last word of technology. And if you’re worried about leaks, IPv6 leak protection will do its job of keeping you safe and sound.

This Panamanian provider knows how to make an entry. You get unlimited bandwidth for binge-watching sessions, a zero-log policy, and apps that work perfectly on every device. Such an effective combo for winning over buyers’ hearts!

Get Protection for 6 Devices with NordVPN 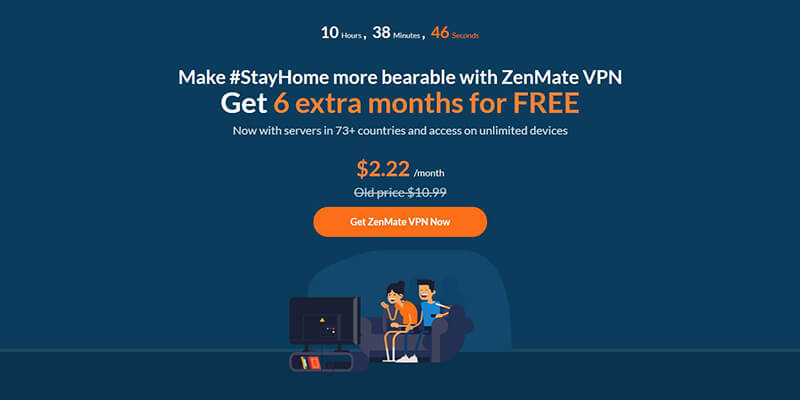 ZenMate is far from being the best choice around but it’s great for VPN account sharing. In this regard, it’s on par with Surfshark, offering unlimited simultaneous connections. We know you love unlimited stuff, so here’s another – unlimited bandwidth.

Had enough already? Good, because ZenMate isn’t unlimited in every regard. This provider is under the ownership of Kape Technologies, the same company that owns CyberGhost, and this is already some good news.

It shares numerous characteristics with that provider, starting with the website and a crystal-clear zero-log policy. Furthermore, ZenMate packs 3,500+ servers in 74 countries, which will come in handy for unblocking sites in a snap of a finger.

ZenMate also comes with an automatic kill switch, protecting your connection and preventing IP/DNS leaks. By default, it uses the OpenVPN protocol but if you want, you can change it to IKEv2, UDP, or TCP.

Surprisingly, the provider is great at unblocking Netflix US, for accessing the largest database of movies and TV shows. Torrenting is also encouraged here, and with its zero-log policy, you don’t have to worry about your ISP snooping around your back.

Much like CyberGhost, ZenMate has 24/7 customer support that you can reach through live chat. Should the problems arise, this support team will fix them in no time. Lastly, you get a 30-day money-back guarantee in case you encounter some… well, unsolvable problems.

IPVanish is a provider that seemingly doesn’t have anything unique to offer, but in reality, that’s not the case. This is a great VPN for multiple devices that offers 10 simultaneous connections that will probably more than enough.

For many users, it’s also very cheap, given that it offers premium services for a cheaper price than its competition. What IPVanish offers is a decent server network of 1,300+ servers in 75+ countries. That’s really not impressive but more than serviceable.

A few years back, IPVanish broke its no-log policy by helping the authorities arrest a suspect. Since it’s a US provider, that’s nothing strange. But, this news took a toll on IPVanish, quickly becoming an untrustworthy provider.

However, in 2023, it regained its no-log policy, which made it much more competitive. Also, its speeds are up to par for the price, and the ability to unblock Netflix definitely won’t slide under the radar. Just think about watching Netflix on 10 different devices – delightful!

Streaming lovers will be happy to know that there’s a dedicated app for Fire TV. Not to worry, apps for Windows, macOS, Android, and routers are all here, for maximum leeway and convenience.

Security-wise, IPVanish comes with all the features we’ve come to expect. Military-grade encryption and an automatic kill switch to their job fine, and if you connect it to a DD-WRT router, you can protect up to 16 or 32 devices in your home.

Get 10 Simultaneous Connections With IPVanish

Having a VPN that supports multiple simultaneous connections is crucial in this day and age. Given that pretty much all of us use at least 2 internet-capable devices, protection for all of them is mandatory.

If you have more than a dozen devices to protect, our recommendation is Surfshark, as it offers unlimited simultaneous connections. However, bear in mind that it’s not better than ExpressVPN that offers 5 of them.

For this purpose, Surfshark is undoubtedly a better option. But, if you want a best-performing VPN at the cost of fewer connections, we wholeheartedly recommend ExpressVPN.