Top 3 VPNs for Brazil: Here Are Our Best Picks!

When it comes to safety, Brazil isn’t among the top countries in the world. However, when it comes to free internet access, the country isn’t as harsh as many South American countries. Brazil is the largest country on the aforementioned continent, and as such, the internet plays a crucial role in connecting people within and outside of the country. Although some messaging apps like WhatsApp are blocked, Brazil residents can use a VPN to access it. A VPN brings many benefits for this country, making us come up with the list.

Best VPNs with Servers in Brazil

Traveling around the world without your favorite shows from Brazil is a hard thing to do. Luckily, if you have a Virtual Private Network, you’ll never have to worry about this. Here are the best providers with servers in this country:

Whether you’re from Brazil or not, using a VPN is like a piece of cake. When you buy a subscription, you only need to install the respective app and start enjoying numerous benefits.

Why People in Brazil Use a VPN?

If you’re worried about your privacy and security, a VPN will reduce all those worries to zero. Here’s why you need a good, reliable provider in Brazil.

Let’s face it – geo-restrictions are present in every country on the planet. For example, many American citizens want to watch US TV when they are abroad. Without a VPN, this isn’t possible.

Every country has its set of limitations that are usually more annoying than useful. In Iran, for example, even the most popular social media websites are blocked.

In this country, however, this isn’t the case. Still, those who like watching US Netflix or BBC iPlayer should know that you can’t access them without the best VPN, at least in Brazil.

And if you’re out of this country and want to watch Globo TV or any other channel, a Virtual Private Network is required.

A classic example of geo-restriction is this country’s banking system. If your bank detects that you’re accessing it from an IP outside of the country, your account can be temporarily blocked.

Or perhaps you want to access your PayPal account back home. With a VPN for Brazil, you can “pretend” that you’re home and fix the issue.

If you think you’re living free, we implore you to think again. Just imagine someone looking at your search history every day. Well, there, the government can do that.

The country’s law orders your ISPs to provide your IP address upon request. So, if you’re doing something that they think is suspicious, your IP could be handed to the government.

The reality is that almost every government monitors internet activity. And although it’s not very strict in Brazil, you want to protect your privacy with a VPN.

This country doesn’t have a strict policy when it comes to torrenting. Many people from Brazil download copyrighted material freely, and only in rare cases, someone gets punished.

But, internet laws are often changing, as the internet itself, so you must take necessary precautions.

Cybercrime isn’t a strange phenomenon in this country. Although not the worst in that regard, it’s still among the top countries for hacker attacks. Of course, the main targets are public spaces, cafes, and restaurants. In Argentina, for example, Starbucks was a common target for hackers.

This is because public networks are often unprotected, making it easy for hackers to sweep through a lot of data. With a VPN, this is unlikely to happen.

The Best VPNs for People Living in Brazil

Every provider offers a different set of features for different purposes. For this country, here’s what features you should look for:

With that in mind, here are our top picks:

Let’s see the reviews for these 3 providers:

ExpressVPN is a champion when it comes to sheer speed but there’s another thing that makes it special – bypassing geo-blocks. People who want to unblock Netflix, HBO, Hulu, or any other streaming website can use this one.

It’s known to easily bypass even the toughest blocks.

Feature-wise, there’s a rich palette. For the start, ExpressVPN has more than 3,000 servers in 94+ countries. There’s no bandwidth limit, so you can enjoy your torrenting, as there’s support for P2P on all servers.

Of course, the provider offers a strict zero-log policy, so they don’t keep your search history. That is also one of the big reasons why it is THE best VPN to use in Brazil.

Yes, even the kinky ones, you pervert! Jokes aside, ExpressVPN is one of a kind, a truly remarkable provider. At the moment, you can get their 12-month subscription and 3 months at a 49% discount.

With the 30-day money-back period, you’ll get your money back if you don’t like it.

CyberGhost is a Romanian giant that sports 7,000+ servers around the world. For those not willing to spend much on a VPN, this is a budget-friendly solution. It also gives you unlimited bandwidth, great for your ‘Netflix & Chill’ sessions or torrenting.

In terms of security, there’s AES 256-bit encryption, kill-switch, as well as DNS leak protection. CyberGhost even has a special Public Wi-Fi Protection feature, so you can access these networks safely while in Brazil.

Like ExpressVPN, CyberGhost is also generous. They offer a 45-day money-back guarantee, as well as a 7-day free trial for Android and iOS. 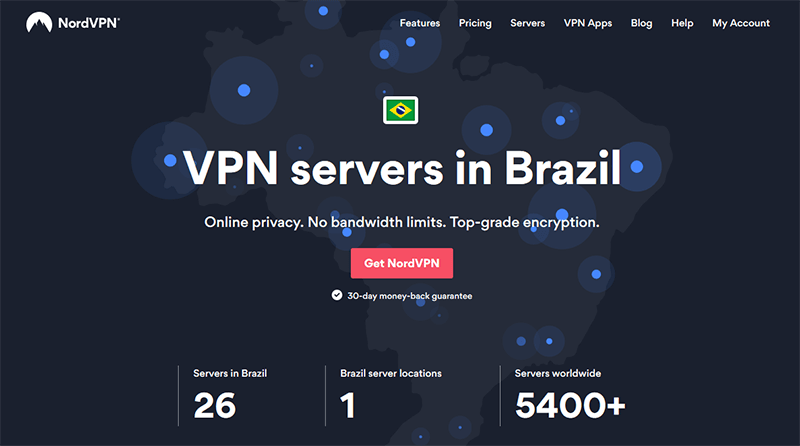 NordVPN is often a choice for many newcomers. If you’re just starting your VPN journey, you could consider either Surfshark or NordVPN which are both really great VPN providers. But, this provider is slightly better for Brazil, thus we decided to go with it.

They have more than 5,400 servers worldwide so you aren’t locked to one country only. You can access your favorite Netflix shows or some sports events on ESPN with ease. NordVPN also offers Double VPN protection, as well as an almighty zero-log policy.

Since you can connect up to 6 devices simultaneously, you can enjoy its features without reservation. And if you don’t like it, you have a 30-day money-back guarantee, so no one is forcing you to buy it unwillingly.

Enjoying free, anonymous internet browsing is bliss. The problem is, many people won’t pay a few dollars a month but they’ll gladly buy cigarettes. For a silly price, you get more than what you paid for, which is the case with ExpressVPN, our top VPN choice for Brazil.

With all the top-end features, ranging from high speeds to impenetrable security, this is your best bet for staying off the grid in this country.