How to Watch Swedish TV Outside Sweden – An In-Depth Guide

Swedish is home to quality TV content that only residents of this country can access. Channels like SVT1, TV4, TV3, and many others, provide substantial and diverse content that will keep you glued to the screen. However, watching these channels outside this country is impossible and as a Swedish resident abroad, that will be a hard hit to sustain. If you stay with us, we’re going to show you how to watch Swedish TV outside Sweden.

Why Swedish TV Channels aren’t Available Outside the Country?

Each country has its local TV channels that often times, aren’t available abroad. That’s completely fine, and as internet users, we must come to terms with it. Swedish channels are no different, and accessing them will often result in an error message, implying that you’re not from this country.

The question is – why does this happen?

To put it simply, everything revolves around licensing. These channels are licensed to operate in this country only, and violating that license will lead to harsh punishment from the government.

However, there are some exceptions to the rule. For instance, you can access TV4 outside this country but only if you prove that you’re its resident. To do so, you need to provide a Swedish Social Security number.

Getting a Swedish IP, on the other hand, will let you bypass this check, giving you instant access to the TV channel. How to get this IP, then? Keep reading to find out!

How to Unblock Swedish TV Outside Sweden?

So, how to watch Swedish TV shows abroad? The answer to that question lies in a VPN. VPN stands for Virtual Private Network and it’s exactly what it sounds like. It allows you to change your online location and access foreign TV and sites in a blink of an eye.

With this service, you can get an IP from this country and “fool” Swedish streaming sites into thinking that you’re currently located in Sweden. Then, you can access all the favorite TV channels and watch shows like Box 21, Quicksand, and many more abroad.

The important thing to mention is that it encrypts your connection using military-grade encryption. This lets you browse the web anonymously, with no one breathing behind your neck and tracking your online activity.

Here’s how to use a VPN to watch Swedish TV shows abroad:

1. Get a VPN Subscription

Getting a provider that has servers in this country is crucial for unblocking its TV channels. For this case, we recommend ExpressVPN.

Once you subscribe, download and install the app on the platform you’re going to use. Now, open the app and sign in with the credentials you provided when registering.

3. Connect to a Swedish Server

On the home screen, open the server list by clicking on the country underneath the connection button. Scroll down until you find Sweden, click on it, and choose a  server in that country. 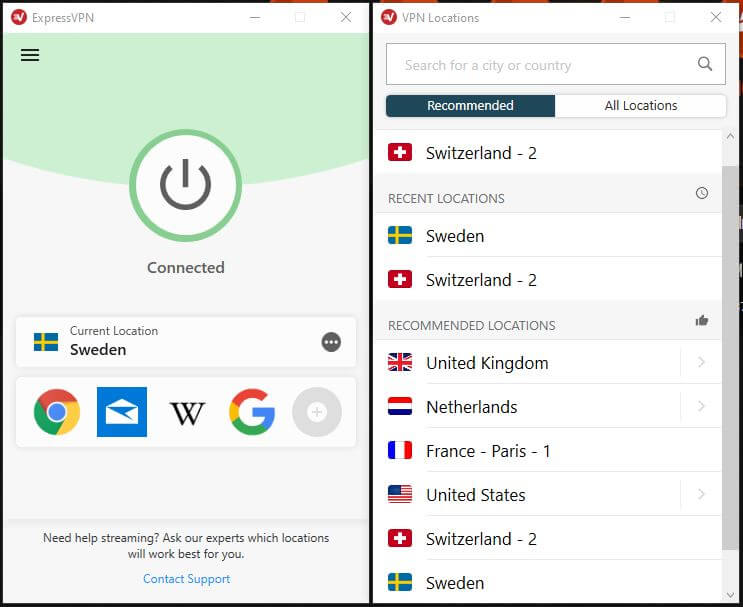 With that out of the way, you have a new IP address that will allow you to access local content from this country. You can now watch Beck, Quicksand, Fallet, and Solsidan limitlessly!

Best VPNs to Unblock Swedish TV from Anywhere in the World

Now that you know how to unblock Swedish TV easily, it’s time to talk more about our top 3 VPNs that will allow you to do so. Here are our best picks for 2022:

ExpressVPN is your best bet for accessing your favorite TV channels in Sweden. It has 3,000+ servers in 94 countries, with lots of servers in this country. One of the highlights of this provider is its speed.

It offers the fastest speeds on the market, giving you the possibility to enjoy local TV buffer-free. On top of that, ExpressVPN is reliable when it comes to unblocking sites. With it, you can enjoy Netflix, HBO GO, Prime Video, Disney+, and many other streaming services.

While security isn’t important for this purpose, it’s important to go over it because it’s a big part of this provider. You get 256-bit AES encryption, which will keep things secure in conjunction with a kill switch. Even better, IP/DNS leak protection is here, preventing accidental leaks.

ExpressVPN will never let you leave footprints online, thanks to its zero-logging policy. It’s audited by PwC for genuinity, so you can rest assured that you’re always anonymous online. This provider is available for every platform, including routers, for protecting every device in your home.

Coupled with unlimited bandwidth and up to 5 simultaneous connections, it’s a versatile and useful VPN for all purposes. Should you decide to get it now, you can enjoy a great 49% discount and 3 months free for an annual plan.

Is affordability on top of your priority list? No problem. CyberGhost comes at a very cheap price, yet packs 7,000+ servers worldwide, including 158 servers in Stockholm. These servers are blazing-fast and can unblock every Swedish TV channel from abroad.

Apart from that, the provider offers some really good dedicated servers. They can be used either for streaming or torrenting and for these activities, CyberGhost is one of the top choices. What you’ll like is the ability to protect up to 7 devices simultaneously, which is more than ExpressVPN offers.

Protection-wise, CyberGhost is far from being a mediocre product. There’s 256-bit AES encryption, a kill switch, and OpenVPN support. We like the addition of an ad-blocker that effectively blocks ads, leaving web pages nice and clean.

CyberGhost offers apps for every major platform, and if you like, you can connect it to your in-house router. This way, it allows you to protect up to 16 or 32 devices on a single account. Since we touched on the price a minute ago, we need to mention that it’s the best cheap provider at the moment.

Its 3-year plan is a killer deal, and you get every feature we mentioned. Make sure you read our CyberGhost in-depth review before you buy it!

NordVPN is another VPN, great for watching Swedish TV abroad free. Sure, it’s a paid provider, but for the price, its performance is outstanding. Here, you get around 5,600 servers in 60 countries, of which 200 of them are in this country.

Swedish users abroad will be happy that these servers are P2P-friendly and even support obfuscation technology. For those who don’t know, obfuscated servers are great for bypassing censorship in China or any similar location.

What about unblocking sites? NordVPN isn’t going to disappoint you. It’s as reliable as your Honda Civic and will constantly provider fast speeds, all while unblocking Netflix, BBC iPlayer, or DAZN, for streaming sports.

Like previous providers, its means of protection is military-grade encryption, including different technologies like Double VPN and NordLynx. NordLynx is a brand-new protocol based on WireGuard that focuses on connection speeds and rock-solid security.

If you’re tired of annoying ads, its CyberSec functionality will block them like your crush on Facebook. And if you’re worried about device support, don’t be – NordVPN is available on all major platforms and supports 6 simultaneous connections.

Sounds fair? Smash the button below to find out more!

Watch Swedish TV From Anywhere in the World With NordVPN >

The providers we talked about are some of the best VPNs regarding streaming. With this guide, you learned not only how to unblock Swedish TV from abroad, but also which VPNs to use for this purpose.

Our recommendation is ExpressVPN, due to its reliability and speeds. When compared to the other two picks, it may be slightly more expensive, but it’s also much better. A great cost-saving option would be CyberGhost and performance-wise, it’s very similar to the other two providers.

The main thing is that Swedish TV is accessible abroad only with this service. Don’t try free VPNs because they offer no protection and can’t unblock foreign TV channels reliably.